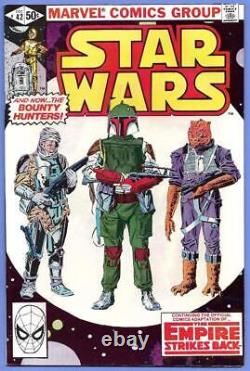 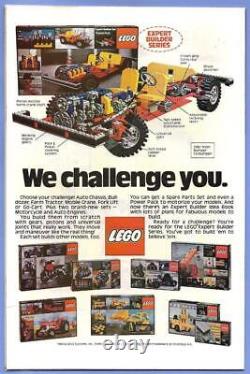 Please read the next paragraph, and if you still want to ask a question, tell us where you are, meaning your country or your U. Zip code, and exactly which items you are thinking about, using a few words, not the item number.

Give me something to work with people! Look below the first picture and. That's for this item alone. Some items don't combine well, they're too big for my biggest box, or even go over size limits. Now on to the show..

Lot of 1 Comic Book. Star Wars #42 1980, Empire Strikes Back Movie Adaptaion Pt 4 VF condition with the First Appearance of Boba Fett in the comics. It's flat and smooth, and very white.

The printer had a problem with its rollers and the paper has a fine crease running through the Movie title in the lower right, and a similar position on the back cover. First appearance of Boba Fett on the cover and first page, a big splash.

First "appearance" of Lando in the British Cover Gallery where they show all six covers from Britain, with a Lando spoiler on one. Spidey's head in the box means Direct Edition. The blockbuster ESB comic adaptation hexalogy of the Star Wars Saga Episode V was published during the original 1980 blockbuster theatrical release of the movie, with script adaptation by Archie Goodwin, pencils by one of EC's best artists, Al Williamson, and inks by Carlos Garzon.

This is a business, not a charity. Then we will respond by wagging a tail and replying in kind with little positive reinforcment of our own. Get Supersized Images & Free Image Hosting. Attention Sellers - Get Templates Image Hosting, Scheduling at Auctiva.

This item is in the category "Collectibles\Comic Books & Memorabilia\Comics\Comics & Graphic Novels". The seller is "comicopolis" and is located in this country: US. This item can be shipped worldwide.