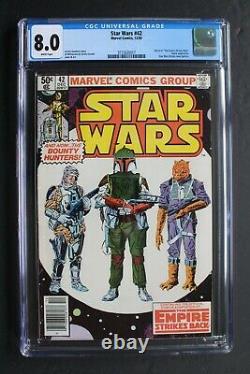 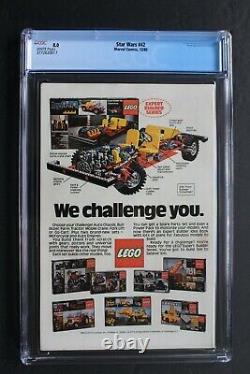 Empire Strikes Back Movie Adaption Part-4 of 6 Parts. FIRST appearance of BOBA FETT. Regular Comic Book format appearance of BOBA FETT. Regular Comic Book format appearance of YODA. Preceded by Marvel Comics Super Special #16 from Spring 1980, published simultaneously with the TREASURY from Spring 1980 and the Marvel Illustrated Books Paperback #02114 from May/1980 (all 3 were Published SEVEN MONTHS before STAR WARS #42 from 12/1980). Is getting his own SOLO. Mandalorian Disney Plus TV Series SPINOFF. From the Star Wars franchise. BOBA FETT is a bounty hunter wearing Mandalorian armor , who started his career during the Clone Wars, but was most notably active during the Galactic Empire era, during which he became one of the most notorious bounty hunters in the galaxy. Boba has his own personal starship dubbed the Slave I. He is an unmodified clone of the bounty hunter Jango Fett, who raised him as his son and from whom Boba inherited the Slave I. The character is noted for speaking very few words and never removing his helmet in the original trilogy, where he was mainly portrayed by Jeremy Bulloch. BOBA FETTS popularity within the Star Wars fanbase has earned him a CULT status. Pedro Pascal plays The Mandalorian in the Highly Rated DISNEY+ TV SERIES, Travels of a Lone Bounty Hunter in the outer reaches of the galaxy, far from the authority of the New Republic. First regular Comic Book format appearance of.
In a Full Page AD for the Marvel UK Star Wars Comic. YODA trains Luke Skywalker on Dagobah. Emperor Palpatine speaks as a hologram.
FIRST Cameo appearance of BOSSK. FIRST Cameo appearance of IG-88. He Hottest KEY issue in the Entire Original Marvel STAR WARS series.
AL WILLIAMSON and Carlos Garzon cover and art. This issue is #5 on the CBSI Hot 100 : STAR WARS COMICS LIST. Scarcer Newsstand Edition, with BAR-CODE in UPC Box at Lower Left cover Corner. Authenticity is Verified by CGC.
ALL Canadian residents must pay current Applicable Canadian. (as Required by your Province & as Required by Canadian Law).

ALL Manitoba residents, in addition to the. (as Required by Canadian Law). (3) SAVE TIME locating the items.