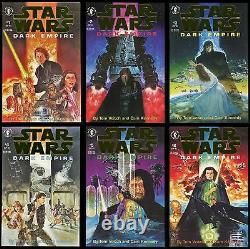 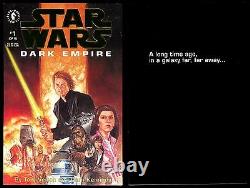 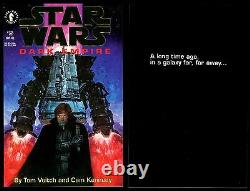 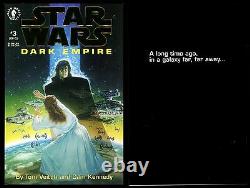 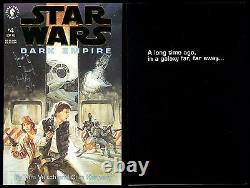 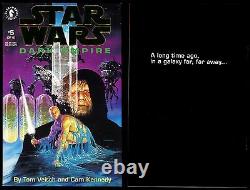 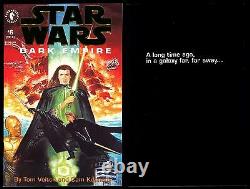 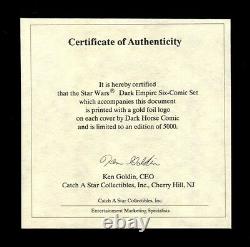 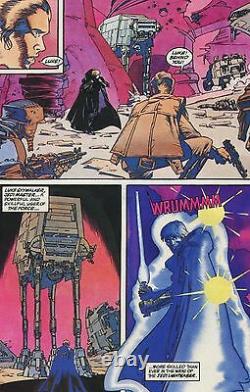 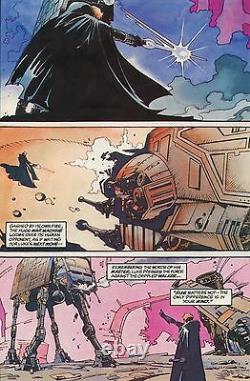 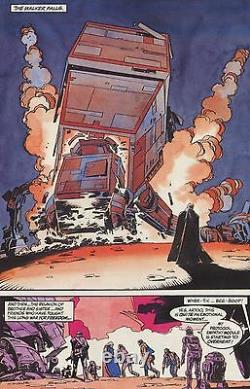 Star Wars - Dark Empire (Gold Foil Edition). Limited to 5000 with Certificate of Authenticity. A long time ago, in a galaxy far, far away..

Six years after the Battle of Endor, the Empire has been reborn, guided by a mysterious new leader. With a price on their heads, our heroes are on the run. Han and Leia struggle to protect their unborn child from the bounty hunters and Imperial troops that dog their steps. But their greatest danger my lie in the troubled heart of a hero - as Luke succumbs to the lure of the dark side! The Destiny of a Jedi.

Following the deaths of Darth Vader and the Emperor and the destruction of the second Death Star, the Rebel Alliance proclaimed a New Republic over three-fourths of the Galaxy. But without the thousands of Jedi Knights who formed the backbone of the Old Republic, the new confederation was a precarious one. Long years of struggle ensued, during which the Imperials regained strength, pushing back the Alliance until the Majority of worlds, including the vital Imperial System, fell once again under Imperial control. Then without warning, civil war erupted, as factions within the Imperial Navy battled the former Emperor's ruling circle for control of the Empire.

The Rebels seized the opportunity to sow confusion among the feuding Imperials, using captured Star Destroyers to conduct hit-and-run sorties into the war zones. One such raid, over the raging Imperial City battleground, ended in disaster: the Alliance Star Destroyer Liberator, commanded by Luke Skywalker and Lando Calrissian, crashed on the planet's surface. As our story opens, Princess Leia Organa and her husband Han Solo, together with the Wookie, Chewbacca and the protocol droid C-3PO, are on a daring mission to rescue their fallen comrades. Next in issue # 2, "Devastator of Worlds" , In a time of increasing chaos in the Galaxy, divided Imperial forces contend ferociously for control of the Empire. The Rebel Alliance is quick to take advantage of the upheaval, spreading the cry of rebellion far and wide - and inflicting stinging blows against the feuding Imperials.

At the height of the growing anarchy, a captured Star Destroyer piloted by Luke Skywalker, Lando Calrissian and Wedge Antilles is shot down over the Imperial City. In an attempt to rescue their fallen comrades, Princess Leia and Han Solo, together with the Wookie, Chewbacca and the protocol droid C-3PO, fly the Millennium Falcon into the heart of the conflagration. But Skywalker, now a Jedi of the highest order, refuses to be saved.

Instead he chooses to face a mysterious energy storm that sweeps him, along with R2-D2, toward certain destruction. Meanwhile, at a secret rebel base, Alliance leader Mon Mothma receives disturbing information: A Dark Side power has emerged from hiding, reunifying the feuding Imperials and gathering the technological might of the Empire for a major assault on the worlds of the Rebellion. Next in issue # 3, "The Battle for Calamari" , Brought to a sinister and beautiful world called Byss, Luke Skywalker finds himself the prisoner of Emperor Palpatine, now triumphantly alive! As the villainous Emperor explains to Luke, it was to Byss that his living energy was transported when his diseased and corrupted body was destroyed by Darth Vader.
On Byss he took a new clone body - as he had many times before. Once restored to physical life, the Emperor allowed the civil war to rage on while he quietly and patiently rebuilt his forces, preparing a massive final blow against all who would deny him everlasting dominion over the Empire! Even now, as Luke appears to fall under the Emperor's ever-expanding power, massive engines of destruction are inflicting death blows to the floating cities of the Calamari, long-standing allies of the Rebel Alliance.. In response to Admiral Ackbar's urgent commands, the Rebel Destroyer Emancipator, together with an armada of Frigates and Star Cruisers, makes the hyperspace jump to the Calamari water world, ready to engage the Emperor's World Devastators! Next in issue # 4, "Confrontation on the Smuggler's Moon" , Believing he can resolve the Galactic conflict by learning the Emperor's darkest secrets, Luke Skywalker has at last taken his father's place as the Emperor's protégé and Supreme Commander of the Imperial forces.
The Emperor, for his part, hopes to push his "young apprentice" over the edge, deep into the seductive embrace of the Dark Side of the Force. Luke's decision to follow his father's destiny is a dangerous and perhaps foolhardy one, for the Emperor has now launched a massive assault upon the crumbling New Republic. As the Emperor's inexorable World Devastators smash the floating cities of Admiral Ackbar's home planet, Lando Calrissian and Wedge Antilles lead Rebel forces in a fierce. And fruitless - attempt to save the gentle Mon Calamari. Meanwhile, Han Solo and Leia Organa embark on a quest to free Luke.
And C-3PO they journey to Nar Shaddaa, a smuggler's moon orbiting the Hutt homeworld. And there Leia meets Vima-Da-Boda, an old woman Jedi overlooked in the great purge, who gives Leia a mysterious gift. But the highest clan of Hutts, brothers of the dead gangster Jabba, have placed a fabulous price on the heads of Han and Leia... A price that attracts the attention of an old enemy: Boba Fett!
Next in issue # 5, "Emperor Reborn" , As the Emperor's World Devastators continues to savage the Alliance. Princess Leia and Han Solo embark on a quest to free Luke Skywalker from the grasp of the Dark Side. With Chewbacca and C-3PO, Han and Leia journey to an ancient spaceport moon, refuge of Corellian smugglers. There they encounter bounty hunter Boba Fett, who survived being swallowed by the Sarlacc on Tatooine.
Thanks to Han's old friends; Salla Zend and Shug Nixx, the Millennium Falcon and its crew escape to hyperspace aboard Salla's Starlight Intruder. A hot rod freighter licensed to haul military cargo to the Deep Galactic Core.
Bobo Fett pursues the Intruder, but meets disaster over Byss - the Emperor's throne world - when he attempts to sneak past the planet's security shields. Once in port, Leia uses her Jedi powers to guide the Millennium Falcon to the citadel where Luke now reigns as the Emperor's protégé. A vicious fight ensues, but according to the plan, Ninx and Salla save the Falcon - and Leia, Han Chewbacca and C-3PO allow themselves to be captured.
Brought at last into the presence of Emperor Palpatine and his Supreme Commander Luke Skywalker, Leia makes a valiant attempt to save Luke, using her intensifying control of the Force. But the Emperor cannot be overcome so easily. He gives Leia a painful demonstration of his ever-expanding power, crowing in triumph that he has finally captured the last of the Jedi! Finally, in issue # 6, " The Fate of a Galaxy" , Even as the Imperial World Devastators continue to savage the Alliance, Princess Leia and Han Solo succeed in freeing Luke Skywalker and R2-D2 from the clutches of the evil Emperor Palpatine. During the rescue Leia captures one of the Emperor's most prized possessions: an ancient artifact called the Jedi Holocron. The Holocron is a legendary source of Jedi teaching believed lost for over six hundred years. As the heroes of the Rebel Alliance escape through hyperspace aboard the Millennium Falcon, Luke explains that the master control codes to the Emperor's World Devastators are now safely hidden in Artoo's memory banks... Using secrets of the Dark Side, Luke has created a doppelganger to trick his friends into leaving him on Byss - where, at that very moment, Luke is confronting the dying Despot, and smashing the Emperor's clone tanks with his lightsaber! But before Luke can finish his dreadful task, the Emperor succeeds in transferring his consciousness to one of his clones, a strong and agile fifteen-year-old! Filled with Dark Side power, the reborn Emperor engages Luke in a ferocious lightsaber duel - and wins. Triumphant over his greatest adversary, the young Emperor vows to find Leia - and the Holocron - and crush the Rebellion. Star Wars - Dark Empire (Gold Foil Edition) (March 1993) Issues #1-6 with Certificate of Authenticity. FC, 32 pages, Comic, 10.25" x 6.75". Comics 1,2,3,4,5,6 are in Very Fine + condition.

A must have for any serious Star Wars enthusiast and/or collector. A very fun & entertaining read.