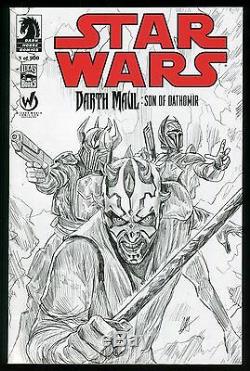 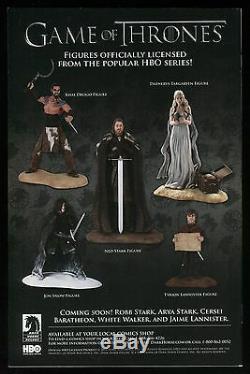 Star Wars: Darth Maul - Son of Dathomir # 1. Wizard World Comic Con Exclusive Sketch Edition. Freddye Lins & Randy Stradley.
A long time ago, in a galaxy far, far away.. Star Wars is an American epic space opera franchise centered on a film series created by George Lucas. The film series began with Star Wars , released on May 25, 1977. This was followed by two sequels: The Empire Strikes Back , released on May 21, 1980, and Return of the Jedi , released on May 25, 1983. The more than two decades after the release of the original film, the series continued with a prequel trilogy; consisting of Episode I: The Phantom Menace , released on May 19, 1999; Episode II: Attack of the Clones , released on May 16, 2002; and Episode III: Revenge of the Sith , released on May 19, 2005. Star Wars: The Force Awakens is scheduled for release on December 18, 2015. Introduced in Star Wars Episode I: The Phantom Menace, Darth Maul, was a powerful villain trained as Darth Sidious's first apprentice. He was ordered by Darth Sidious, the Master of the Dark Side of the Force, to capture Queen Padmé Amidala... This Dark Horse Star Wars: Darth Maul - Son of Dathomir story is an adaptation of unproduced scripts from Star Wars: The Clone Wars, which would have been part of the television show's sixth season had the series not been cancelled in 2013. Although thirteen episodes from the sixth season were released as "The Lost Missions" on March 7, 2014, the episodes that Son of Dathomir were based on were not completed and therefore not released as actual episodes. The story is part of The Clone Wars Legacy line. The story is set during the Clone Wars, and is a continuation of Darth Maul's story from the show. The rogue Sith Lord, who was revealed to have survived the events of Star Wars: Episode I The Phantom Menace in the episode "Witches of the Mist, " has been captured by his former master, Darth Sidious, following the events of the episode The Lawless. Sidious uses Maul in an attempt to draw Mother Talzin, Maul's mother and the leader of the Nightsisters, out of hiding so she can be destroyed, as Sidious considers her a potential threat to the eventual Sith domination of the galaxy. Maul confronts the Confederacy of Independent Systems and captures Count Dooku and General Grievous in pursuit of vengeance against his old master, while the Galactic Republic and Jedi Order become involved in the hopes that they can defeat Maul, Dooku, and Grievousand, in doing so, end the Clone Wars. A long time ago, in a galaxy far, far away... Star Wars: Darth Maul - Son of Dathomir! After he survived his confrontation with Obi-Wan Kenobi on Naboo, and was saved from madness by the Dathomir witch Mother Talzin, Darth Maul constructed a vast criminal syndicate known as the Shadow Collective, gathering the galaxy's most feared crime lords, Black Sun, the Pykes, and even the mighty Hutts have all fallen in line behind the dark warrior. From a base of operations on the planet of Mandalore, Maul plotted revenge against his many enemies.

But Maul's lust for power and conquest has drawn a great enemy upon him -- his former master, Darth Sidious. Judging Maul a threat to his own designs, Sidious defeated his former apprentice, ruthlessly murdering Maul's brother Savage Opress and leaving Maul beaten but, curiously, still alive and imprisoned.. In issue # 1, You Can't Keep a Bad Sith Down! ", In the aftermath of the events of "The Lawless, Darth Maul has been captured by Darth Sidious, his former master, and imprisoned in the Spire, a Separatist prison on Stygeon Prime.

Sidious is followed by Gar Saxon and Rook Kast, two of Maul's Death Watch followers, on orders for Mandalorian Prime Minister Almec to free Maul from imprisonment. Once freed, Maul and the warriors are to rendezvous with Death Watch forces on Zanbar. Sidious speaks to Maul in the Spire and reveals that he still has use for his former apprentice, before the two are interrupted by Count Dooku. The arrival of Sidious' new apprentice angers Maul, who views Dooku as a Sith pretender and unworthy of the title of Sith Lord. Sidious and Dooku leave to confer with one another, as Sidious explains that he imprisoned Maul to draw out Mother Talzin, leader of the Nightsisters, so she can be destroyed as a potential threat to the eventual Sith rule of the galaxy.

Sidious also reveals that he has a history with Talzin, from whom he received Maul when Maul was a child. Sidious orders Dooku to find out more information about Maul's Shadow Collective, as Maul will end up believing that the Sith want to destroy his arm, and seek out Mother Talzin for help.

After Dooku briefly interrogates Maul, Kast and Saxon mount their rescue. The two Mandalorians reach their captive leader and free him from his restraints, before blasting out a wall of the interrogation cell. Maul and the Mandalorians make their way down the mountain, via zipline, that the Spire sits upon and escape aboard a Gauntlet fighter. That way, he can seek out Mother Talzin for help. With Separatist forces in pursuit, Maul and the Mandalorians reach Zanbar.

Once again in command of his army, Maul reclaims his darksaber, the weapon that belonged to the previous Death Watch leader, Pre Vizsla, and tells the Mandalorians that war is at hand. The Separatists arrive on the moon and launch all of their forces against Maul. Death Watch is overwhelmed by the droid soldiers, while Maul faces Grievous in single-combat.